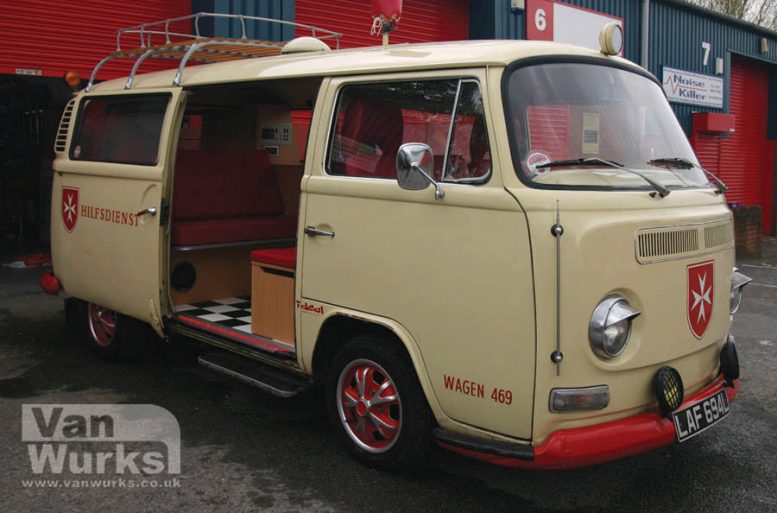 Then my daughter and I were walking the dog when we spotted a ‘For Sale’ sign on a VW camper parked in front of a neighbour’s house. We knocked on the door and were shown round the camper, a Type 4 2.4 litre diesel with a really smart pop top. The price was £14,000, no offers, and way beyond my range. Even so I was really taken with the concept of the thing and the freedom and independence offered by a camper suddenly appealed enormously.

The next day I went on to eBay, for the first time ever, and searched under ‘VW campervan’. At this point my knowledge of campers was minimal; I thought that the conversions were all done by VW, I thought that the newer ones would be the most expensive, I didn’t know there was a difference between early and late bays and, (get this), I thought that as they were VWs, reliability would never be an issue. 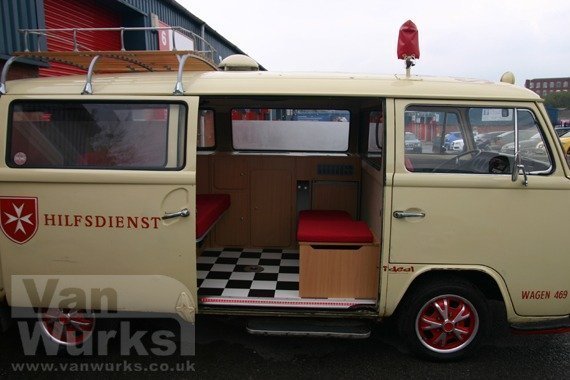 There were lots for sale on eBay for a wide range of prices which I found quite confusing as I still lived on the planet where the older it is the cheaper it is. Oddly enough, only one caught my eye, a 1972 Bay ex-ambulance, and that was the one we ended up buying. Looking back on it, what sold this one to me was the way it looked in the photos. It was posed overlooking a beautiful beach against a bright blue sky. The camera angle was really low so it looked even more slammed than it was, (not that I knew what ‘slammed’ meant then) and with its ambulance insignia it looked ultra cool. I showed the pictures to my daughter who loved it, although my wife was a bit more circumspect. She pointed out that as it was an old ambulance it didn’t have a camping interior, nor did it have a raising top and other irrelevant stuff like that. The flashing blue light and sirens were interesting but not a lot of use in a camper. But she got caught up in our enthusiasm and agreed that we could put in a bid.

The auction was at around £4,000 and I put in a bid at £100 over that. Straight away I was overbid and eventually had to go up to £6,500 to become the top bidder. It had about three days to go, finishing at 7-20pm the following Friday. My bid remained top until Friday evening and the three of us gathered to watch the final moments. This was my first ever bid on EBay and I was told that in the final moments loads of bids would come in and blow us away. True enough, with two minutes to go the bid went up by £200. Despite promptings from the others, I resisted the temptation to re-bid. With seconds to go the top bid was ‘withdrawn’ – (some sort of scam here?), and we had won.

We opened a bottle of champagne and I phoned the seller. He had not seen the final moments and asked how much it had gone for. He seemed a bit disappointed with the price but asked how I proposed to pay, was I going to use PayPal? I said I had no idea what that was but I would come down to his house, in Newquay, next weekend and would bring the cash.

I sorted out insurance and bought a one way flight to Newquay for the following Saturday morning.

With my pocket bulging with cash, I caught a bus from the airport and was dropped a short distance from the address. It was a lovely walk with great views over the bay. Suddenly the bus came over the brow of a hill; it was my first sighting of it in the flesh. It was unmistakeably the one and I waved madly at the driver. The bus looked every bit as wonderful as it had in the advert. He stopped and I jumped in. Tom was a likeable young surfer dude on his way to Morrison’s to get his weekly shop before I took the bus away from him. He put air in the tyres and filled it up with petrol. He loved the bus and was really sorry to have to sell it – his third child was on the way.

I told him of my plans to convert it into a camper but when I said I was going to make it into a pop top he said if I did that he would not sell it. He made me promise the roof would remain intact. Looking back I am so glad he did, as the roof has the original driver’s name, the number, a siren and a flashing light, all a vital part of the bus’s heritage.

Tom and the VW Ambulance

Back at his home, which must have one of the best views in England, directly above Newquay Bay, he counted out the notes, gave me a receipt and a quick introduction how to drive the bus. (Mainly take it down to first over any bumps as it was really low). Apart from that it drove really well and I soon got used to the waves and general interest that the bus inspired. The one downside was that it smelled strongly of petrol, and in fact there was a steady drip of petrol under the bus. Today I would never drive a bus in that condition but then I just thought it was a shame that so much petrol was getting wasted.Toms Sea view

I got back to Manchester at about 10pm and phoned my wife to get the video camera ready and as I pulled into our road I had the sirens blaring and the blue lights flashing. Our neighbours were not impressed.

Me and camper on the way homeNeedless to say the first job was to find a reputable air cooled specialist and everyone I asked recommended MAC. I took it to them and within five minutes Stefan had ripped out the leaky fuel lines and replaced them. He has looked after the bus ever since and is a local legend in Manchester. Everything Stefan has done has been great and he thoroughly deserves his status an air cooled genius.

Now that the bus was safe and unlikely to burst into flames, it was time to consider the interior. In the back were two stretchers, (Tom and his mates used to sleep on them when they went surfing), a wheelchair and two buddy seats. I pulled it all out, put it on eBay – I was an eBay expert by now, and sold it to a bloke in Tenerife. Sad to see the back of all that heritage but we had bought the van to be a camper after all. 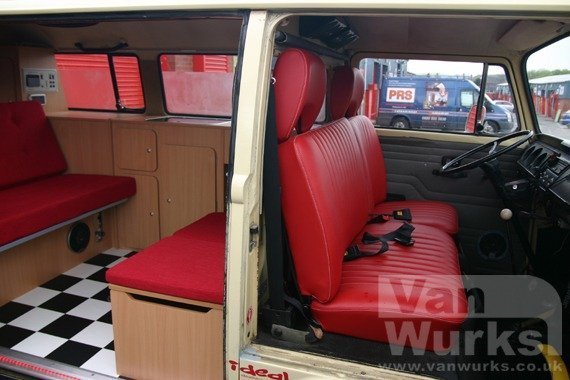 The medical equipment included
By this time we had managed to get to some of the VW shows and I was beginning to find my way in the VW scene. At least I understood why splitties were so expensive and I learned that there is an important difference between early bays and late bays, but that mine was neither – it was a ‘crossover’. I also learned that if you want reliability you really have to look after them. At Bus Freeze we met Nick and the team from Vanwurks and were very impressed with the kit they showed us. We continued to check out the interior market and eventually decided Vanwurks was the most attractive option, especially as Nick agreed to do the installation himself. As a result we have ended up with an interior that fully does justice to such a remarkable and fascinating piece of motoring heritage. Everything in it looks the part and works really well. Since then we have toured the UK and enjoyed many weekends either at VW shows or away with just the dog. 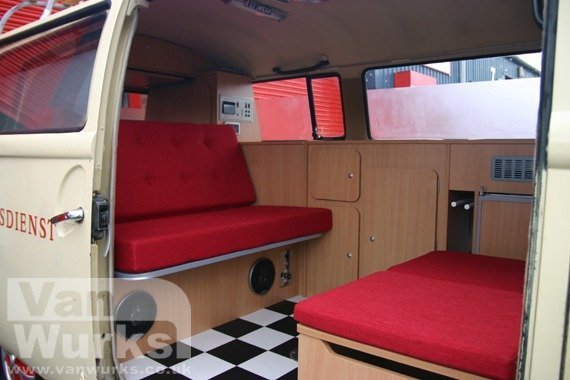 One of the best things about the VW scene is that the people you do business with are VW enthusiasts first and foremost and this is particularly true of Nick and the team at Vanwurks. We have since met up at various shows and although we are always happy to extol the virtues of Vanwurks to anyone interested in interiors, we see them now more as friends and fellow travellers in the weird and wonderful VW community.