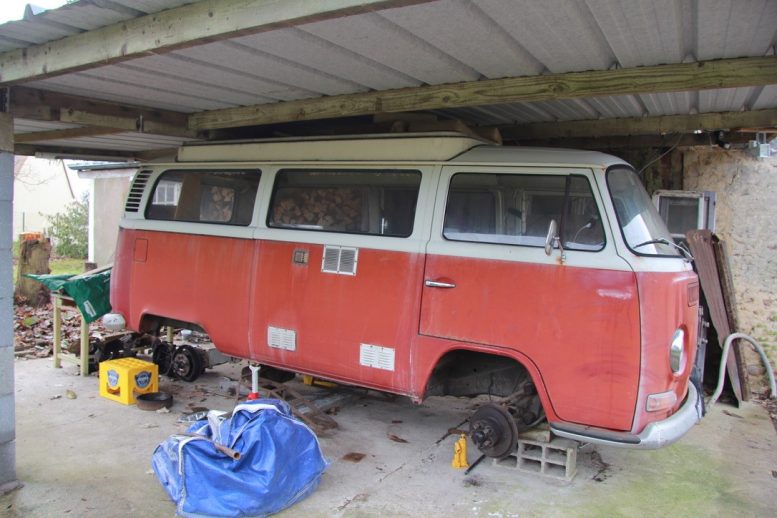 Few Volkswagen enthusiasts can resist the temptation to investigate when the words ‘abandoned camper’ are muttered. Told in his own words, this is the story of Paris based Mark Rawlins and his father and son mission to rescue a T2 camper from a farm in Spain.

VW’s and VW campers have long been a passion for me. My first car was a left hand drive red 1972 VW beetle 1300 with factory original metal sunroof and cloth high back seats, I really regret not having kept this car. It left for the breakers yard on the back of lorry sometime in the mid 1980’s.

My brother, Nick, also had a beetle, a slightly earlier 1500 automatic. They required a lot of work to keep them on the road, my mechanical skills were honed in these years. With this in mind, and a penchant for country pubs, we thought that a VW camper, same bits underneath, and cheap, would allow us to either go as a group, and nominate a sober person to drive us all home, or to sleep in it.

So Nick and I bought  Tess, a 1973 1600, was a great success,  went to many Kentish pubs, and also toured France in 1989 with five friends going surfing and canoeing in the sea, lakes and rivers. Unfortunately,  after two or three years of good fun, she met her demise one misty morning when my brother drove her into the back of a parked lorry, which fatally damaged the  whole of the left hand side.

Fast forward a couple of years to 1990 sees me and my wife to be, Tracy, off around the world for a sabbatical year. In Australia we bought a 1972 tin-top that took us from Cairns in far north Queensland, all around eastern Australia, up through the centre to Ayers Rock, Uluru now and then back to Brisbane, 16000 km in 6 months and didn’t miss a tick.

A year after we returned from our voyage, we found ourselves moving to Paris, and for a year with no car whatsoever.

Fast forward again to a summer evening in 2013, and a chance conversation about VW campers with an American friend, Gene, who had moved to France in the ‘60s, he tells me “I have one! It has been abandoned at my stepdaughters farm in Spain since the mid-1990’s and you can have it if you want…”. Given the evening wasn’t a particularly sober one, and that I was leaving the following day to take my sons camping for a few days, I had all but forgotten about the conversation. Then the phone rang, Gene had called his step-daughter to tell her I was having it. As luck would have it, we were driving to Spain later in the summer and would be close to where the camper had been holed up for so long. My previous experience told me that I could expect a rusty wreck of no particular use to anyone. However, once we had negotiated 2 km of rocky track then descended a steep path to an old vineyard in a valley, two minutes of looking in the usual places told me that there was not a spec of rust to be seen and that the metal was as good as the day that she came out of the factory. The engine and gearbox on the other hand had been cut out with the help of an angle grinder. Who would do that? A 17 mm spanner is a lot easier.

Having decided that it was definitely worth the effort to get her back on the road, we had of course, literally to do that. Access was impossible with a normal car, a 4×4 may do it, anything bigger would not have got to where she lay. So my eldest son, Harry and I, set off just before Christmas 2013 to recover the beast, car loaded with tools and, most importantly and tirfor with steel hawser and ropes. The first 2-300 meters up the steep path took the first day. Did you know that the 1 m swing of the tirfor handle pulls the hawser through 1cm.? On the other hand it pulled that bus up a 1 in 3 slope with more patience than strength. Harry and I taking turns at steering (going up backwards) and swinging the tirfor handle backwards and forwards.

Day 2 of the pull saw us reach tarmac. To get the camper back to Paris, I had engaged a company that I found through the Anyvan site (www.anyvan.com) a marvellous experience, and very reasonable and efficient. Once safely aboard their trailer, Harry and I started our 1100 km journey to Paris.

A few days later, the camper was in my garage and the work could begin. Both on the garage, and on the camper.

The following months saw me rebuilding the mechanical parts, putting a new engine in, re-installing the gearbox, replacing all the brakes, joints, shock absorbers, and pipes of all type, then finally oiling and greasing every thing I could. Nearly all the parts that I needed when I was repairing and rebuilding the mechanics were provided by CoolAir in Kent (www.coolair.co.uk), I have to add that I got fantastic support from Christian for his advice, help and patience! With a new set of tyres, it was time to get the French MOT and get it registered. This is when the history of the van helped us, despite being originally supplied to the UK, to the Devon factory, it was exported and registered in France sometime in the late 1980’s, this is how it ended up in the hands of my friend Gene, it was on French plates, I think he got it for a good price, the steering wheel was on the wrong side for this side of the channel. It had then been registered in Holland, hence the Dutch plates in some of the picture, by his step-daughter as she was living there at the time, but luckily they didn’t cancel the French registration, so it was a simple case of transferring ownership when the time came for me to register it. On the other hand, I would love to know if there is a way of finding its original British registration though, maybe someone could help? I have a feeling it will be coming home at some stage in the future. The only clue to the UK past is a sticker in the rear window, that is now quite badly damaged that reads “Super Star Garage – Taunton, SOM. Tel: West Monkton 298/559”.

Once on the road, I could get to the next stage of the work. The body work, which had been so well protected by the arid Spanish climate for so many years, was not going to stay rust-free in northern France or in the UK without a brush over. I got into contact with Jason Elman at Panel ’n Paint in Hythe (www.panelnpaint.com), they took the van in looking very tatty and she came out pristine. When I was speaking to Jason, he was reluctant to believe that there was no rust, he was flabbergasted when I got it to him, there really wasn’t any! He took in hand in the summer of 2014, I picked up a shiny new version from him in the autumn, he had done a fantastic job which still looks as good today as it did when it came out of his workshop nearly 6 years ago!

Jump forward again a few years to 2017, during which we had been using the camper quite a lot, but not for camping, the old interior, the original Devon “Devonette” had been eaten by lizards and mice, what they hadn’t eaten they’d either slept in or used as a toilet. Hot summer days would still release the pungent odour of its dormant past…

Having been setting aside some money with a view to having the inside looking as good as the outside, Tracy and I decided that the time had come to get the interior into a state that would make it useable as a camping car again. After much looking around, we decided that the man to do the job was Nick Gilligan up at Vanwurks. As is probably obvious, Oldham is a fair old trek from Paris, but it was going to be worth it. Setting off from Paris a very wet and blustery evening in December 2017, after about 100 km, we hit snow and sleet and… it was cold in that big empty and uninsulated van… anyway, I thought, it will probably blow over once we cross the channel. It didn’t. Arriving in Oldham, my thoughts turned to all the salt that was now stuck to every surface of the body, Nick did too. The first thing he did was get the van to the car wash. January 2018 and the date arrives to be picked up. Nick loves to build the drama, so doesn’t send any photos during the work, he likes to see the delight on peoples faces when he opens his garage door. What can I say? This is what I saw:

Since then Tracy and I have been to the UK a couple of times and done two road trips around France, it has been an absolute marvel, the interior works a charm and the bed is very comfortable. My only observation, is that my wife has chosen the door side, she loves to lie in bed looking out in the morning, at whatever the view is that we have chosen the night before, however, this means I have the kitchen on my side, and guess who gets to make the tea! I have had to promise Tracy to not take every holiday in the VW though, and when we have been on our travels, the occasional night in a gîte or B and B does happen to smooth the wrinkles with Mrs R!

But, oh the feeling of freedom that it gives. Shall we turn left or right? It doesn’t matter, whichever looks to be prettier.